Krav Maga literally means "Combat – Contact" fighting for survival up close and personal. The roots of modern Krav Maga began with the need for self-defence in the land of Israel.

Krav Maga has no single "founder" and no official beginning, but when Europe became unbearable for Jews, Imi Lichtenfeld left the country and eventually ended up in the land of Israel in 1942, then controlled by the British and began to incorporate techniques from different styles to form an effective approach to self defence to enable the Jewish community to defend itself against Fascist militias.

Krav Maga is designed for self-defence, combat, and worst case scenarios for men and women of all ages and from all over the world.

Krav Maga (IKI) is free flowing; all styles of punching, kicking, chokes, take-downs are employed with the aim of neutralizing the enemy in the shortest amount of time possible. It is for average people who does not possess strength , speed & precision.

The style is easy to learn and apply. Krav Maga (IKI) chooses simple movements that are natural to the body, based on instincts that are already established within us.

"Krav Maga is a Self Defence Technique and not a Martial Art which can be easily learned and practiced in shortest time." 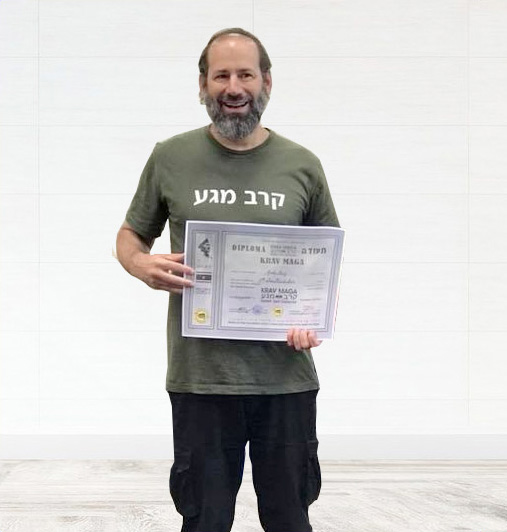 Master Moshe is a gentle soul with the heart of a warrior. Israeli Krav International (IKI) is under the direction of Moshe Katz.

Moshe Katz, Head Instructor, during the course of his 30 years in martial arts Moshe has trained with some of the greatest instructors around the world. He is certified by Wingate, Israel’s national Martial Arts certification board and by Itay Gil; his instructor and friend of many years.

Over the years Moshe has been recognized world-wide for his Krav Maga abilities and innovations and has received numerous awards and honours from military, police, civilian and governments. He has been featured in news broadcasts, TV and radio, newspapers and magazines throughout the world.

In 2010 he was inducted into the International Martial Arts Hall of Fame as instructor of the year.

In 2014 he was inducted into the American Black Belt Hall of Fame as International Krav Maga instructor of the year.

Moshe worked for the Israeli Ministry of Education as a Krav Maga instructor and contributed to the program for school children aged 6 – 18.

Dhaval Vora is an entrepreneur with passion in martial arts and self defence. He is an avid traveller and often travels to west Africa and Asian countries for business. During these travels he has come across situations when he was rendered helpless.

Hence he decided to pursue self defence course to overcome such situations. He strongly believes that self defence is a basic right to life and is hardly taught in schools or educational institutes in India.

His search landed him in with his master and philosopher of life – Master Moshe Katz from Krav Maga – Israeli Krav International.

His experience and training with Master Moshe Katz convinced him that this is the simplest and easiest self defence technique , for average people like him.

According to Master Moshe Katz average people includes Doctors, Businessmen, IT professionals, college students, school kids, Housewives, Lawyers. They lead a busy life with huge responsibility but face offensive or challenging situations which requires them to be on guard always and protect themselves and their family.

Thus, with his conviction, belief and trust towards his master, he brought Krav Maga IKI to Mumbai, India

Hopefully this seed sown by him will grow into a tree helping our community and nation.

I wish to appreciate and thank Master Moshe Katz, Esther Lehman, IKI team Members and my fellow trainers for the wonderful experience I had during the diploma training in Israel in 2019.

I also wish to acknowledge Master Moshe for allowing me to use the thoughts and content from his website to make it an enriching experience for the readers of this website. 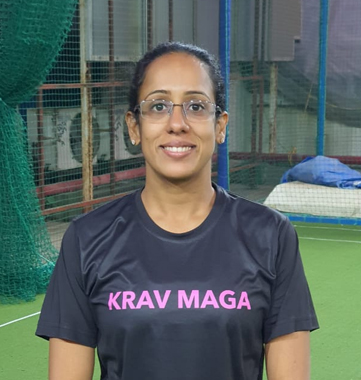 Pooja Vora is an overseas experienced counselor and a fitness enthusiast. Her exuberant personality is magnetic and she has a natural flair for business development and networking in corporates and institutes. Her goal in life is to empower women and make them self-reliant.
Pooja Vora
Sr Business Development executive – Corporate 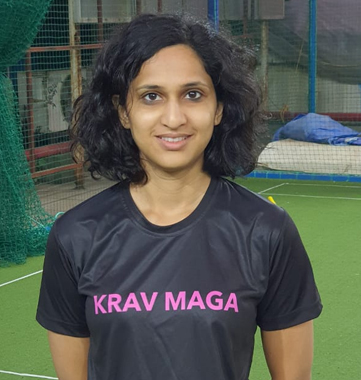 Like they say “Flock of birds, fly together”, Vani Nair ended up collaborating with Dhaval and Pooja because of her keen interest in fitness and self defence. She has 15 years’ experience in insurance industry. She is currently involved actively with Kravmagain to create awareness and develop new business.
Vani Nair
Sr Business Development executive – Retail